I have written two books and co-edited three volumes. Further information below. 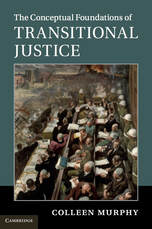 ﻿In recent decades, a number of countries emerging from long periods of repressive rule and civil conflict have attempted the difficult transition to democracy, among them South Africa following apartheid, Rwanda after the 1994 genocide, and Egypt after the Mubarak era. Though the precise markers of a successful transition to democracy are a matter of ongoing dispute, scholars and policy experts alike agree that societies must explicitly address their legacies of violence, which typically include systematic and brutal human rights abuses. “Transitional justice” refers to formal attempts by post-repressive or post-conflict societies to address past wrongdoing in their efforts to democratize. Societies in transition have turned to a range of alternate measures beyond criminal trials, such as amnesty, truth commissions, and reparations. There is little consensus, however, about which response(s) are appropriate and morally justified. At the core of such disputes is disagreement about by which standards of justice such responses should be evaluated.

"Colleen Murphy develops, and delivers, the bold argument that transitional justice -- the way a society reckons with massive human rights abuses -– is not ordinary justice. It is not reducible to retributive or restorative principles, nor to case-by-case determinations; rather, it is distinctive justice, because it is concerned with the just pursuit of societal transformation and relational repair. Murphy’s book is a game-changer: a must-read for anyone concerned with the theory, practice, and policy of post-conflict rebuilding."
Mark A. Drumbl, Washington and Lee University

"In The Conceptual Foundations of Transitional Justice, Colleen Murphy develops a theoretical framework for understanding the conditions, objectives, and processes of transitional justice. It is a very interesting and useful contribution to the literature on transitional justice … the book helps us to rethink how we - practitioners, interested parties, and scholars - can more coherently, effectively, and justly respond to past wrongdoing."
Roger Duthie and David Tolbert, International Center for Transitional Justice, James Stewart Blog Symposium

"By reframing justice away from legal accountability and toward the evaluation of legal responses based on their contributions to reforming political relationships, between citizen and state and among citizens, she moves past the increasingly unsolvable debates that have preoccupied the field."
Laurel E. Fletcher, University of California, Berkeley School of Law, James Stewart Blog Symposium

"Murphy deserves accolades for traversing numerous disciplinary divides in her approach to transitional justice. For scholars seeking to build more bridges between international law and philosophy, this books offers an excellent way as to how it can be done."
Steven R. Ratner, University of Michigan Law School, James Stewart Blog Symposium

"Murphy eloquently argues that transitional justice is not like normal justice; it is qualitatively different because of the fundamentally distinct circumstances that constitute periods of political transition. These include: (a) pervasive structural inequality; (b) normalized collective and political wrongdoing; (c) serious existential uncertainty; and (d) fundamental uncertainty about authority. These background circumstances mean that ordinary ideas of retribution, corrective justice, and restitution do not cater to the needs of societies undergoing transition from authoritarianism/mass violence to democracy/peace. The misfit with these usual concepts of justice is so acute that we must craft an entirely new, distinct brand of justice that follows its own logic and answers to its own self-consciously defined first principles."
James Stewart, University of British Columbia, James Stewart Blog Symposium

"...the book is a sophisticated and analytic account of a timely topic, and merits a careful read by those with an interest in the challenges of transitioning from injustice to justice in circumstances that make the transition, without good guidance of the kind Murphy offers, seem impossible to achieve."
Patti Lenard, Notre Dame Philosophical Reviews (2018.03.05)

"Murphy’s accessible and engaging book provides a normatively clear and philosophically rigorous theory of transitional justice that is a valuable contribution to a burgeoning literature on a complex moral and political subject. … its clarity helps to illuminate where future philosophical work on this complex theme should go."
Catherine Lu, Criminal Law and Philosophy (2018)
​
"Colleen Murphy’s new book on transitional justice displays her signature blend of analytic rigor, elegant writing and empirically anchored theorizing. She follows up her excellent first book on political reconciliation with a volume on what it means to transform a war torn society so that it can, ultimately, become reconciled. The just pursuit of political transformation, Murphy argues, is at the heart of the idea of transitional justice. This is the best, most ambitious philosophical account of transitional justice that I have read. The book can be read with great utility by scholars and students seeking to understand the unique conditions and dilemmas surrounding transitions, as well as by policy makers interested in fashioning decent and legitimate transitional institutions."
Nir Eisikovits, University of Massachusetts, Boston, Ethics, vol. 129, no. 1 (2018), pp. 132-135

A Moral Theory of Political Reconciliation 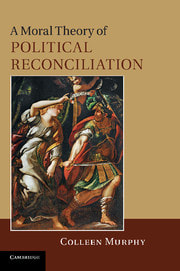 Subject of symposium in Criminal Law and Philosophy

"What is needed for the reconstruction of political relationships in societies that have been torn apart by deadly conflicts? Colleen Murphy has answered this question in a path-breaking book that is essential reading for anyone concerned to understand the rule of law and the place of trust in our shared social lives."
Alasdair MacIntyre, University of Notre Dame

"A Moral Theory of Political Reconciliation is far and away the best treatment of political reconciliation in a growing literature on this hot topic. Murphy has mastered this literature, distilled it, and set it off against her own views, which, to my mind, are better than the extant views. I would single out her discussion of the concepts of reconciliation, rule of law, and trust, as especially meritorious; I learned an enormous amount from them. The book is a tour-de-force, setting out a new way to think of reconciliation and arguing at length against all of the major alternative approaches." - Larry May, Vanderbilt University

"....This is a well-argued analysis of some of the damage that civil conflicts and repressive governments do to political relationships, especially in postauthoritarian transitional societies...." - Stephen L. Esquith, Perspectives on Politics, vol. 9, no. 2 (2011), pp. 418-420
"Colleen Murphy provides us with an original, nuanced, well-written and analytically incisive diagnosis of how political relationships fail and what it takes to fix them. This is an important and timely book furthering both our understanding of what counts, normatively, as a healthy polity and what can be done practically to nurse war-torn communities back to health.... The book is a display of analytic political philosophy at its best, seamlessly blending the normative and practical aspects of post war repair. It is sure to become a central text in the growing literature in this field." -
Nir Eisikovits, Human Rights Quarterly, vol. 34, no. 4 ( 2012), pp. 1211-1214

"For anyone interested in a critical, practical, and political exploration of reconciliation, Colleen Murphy’s book is a wonderful resource. It is a fast-paced and well-written book that compels the reader to keep going. And, it is useful in the everyday world." -
Val Napolean, Jotwell (http://equality.jotwell.com/one-engagement-moral-theory-of-political-reconciliation/)

"A Moral Theory of Political Reconciliation offers theorists and practitioners of reconciliation a wealth of thoughtful insights and useful theoretical tools for navigating the murky waters of post-conflict repair. It also invites us to rethink the nature of political relationships more generally, both as they ought to be and as they fall away from this ideal. Finally, Murphy’s desiderata for a theory of political reconciliation and her own answers to those desiderata raise the bar for future philosophical interventions."
Alice MacLachlan, Transnational Legal Theory, vol. 3, no. 1 (2012), pp. 95-100

"Murphy succeeds in fashioning an ethic that conceives and addresses the problem of political reconciliation as a whole. Her development and deployment of the rule of law, trust, and capabilities is creative and rigorous. Her book will likely stand as a major position in the developing literature on the ethics of addressing past injustices in pursuit of more just political orders… a masterful treatment of the vexing subject of political reconciliation."
Daniel Philpott, Journal of Moral Philosophy, vol. 10, no. 2 (2013), pp. 227-230
"Both texts deliver an original insight into and comprehensive account of the collapse and restitution of political relationships, which will be of interest to philosophers, legal scholars, policy analysts and all those who are interested in transitional justice, democracy, and global politics and international relations. The books are setting out a new way of thinking about reconciliation, and potentially could be used both as a classroom textbook and as a means for advancing the political reconciliation discourse."
(joint review of my book and Nir Eisikovits, Sympathizing with the Enemy”) Olivera Simic, Griffith Law Review, vol. 21, no. 3 (2013), pp. 809-811

"Murphy […] dedicates a considerable portion of her book to enabling a greater understanding of the relationship between the individual/groups and the state/officials through a meticulous examination of the manner in which the constitutive elements of political relationship, such as trust and capabilities, are damaged by civil conflict and repressive rule and by illustrating what transformed and rebuilt relationships should look like." -
Ambika Satkunanathan, International Journal of Transitional Justice, vol. 8, no. 1 (2014), pp. 171-181

"...over the past quarter century philosophers have developed analyses of forgiveness, mercy, pardon, reconciliation, atonement, and other collective responses to wrongdoing in an attempt to make sense of morally appropriate political responses to them. Colleen Murphy’s A Moral Theory of Political Reconciliation (Cambridge, 2010) is an important and thoughtful contribution to this literature […] Murphy’s remarks on the nature of reciprocity and respect for moral agency, and the role of group identity and history in effecting successful political transitions are insightful and compelling." -
Paul Hughes, Mind, vol. 124 (2015), pp. 663-668